How a less Christian Europe,
an aging population in the West, and the empowerment of women are going to shape the future.

The 21st century is still just a teenager, but we can already forecast with a fair degree of confidence what its demographic profile will look like by 2050.

Population growth will have slowed down. Global aging will have risen to unprecedented levels. Birthrates will drop. The working-age share of the world’s population will shrink. Poverty will ameliorate in poor countries; income inequality will worsen in wealthy ones. And for the first time ever, Islam will challenge Christianity as the world’s largest religion.

What’s notable about these disparate trends is how much they are interrelated. They’re driven not just by the traditional demographic triad of births-deaths-and-migration, but by myriad powerful new forces that define modernity — from the empowerment of women, to improvements in health care, to the information and technology revolutions, to the concurrent rise of secularization and religious fundamentalism.

However, the fact that they are connected does not mean they are universal. Beneath the broad umbrella of global demographic change, there will be sharp variances across regions (and sometimes within countries).

This means that in 2050 there will be around 3.5 times more Africans (2.5 billion) than Europeans (707 million). In 1950, there were nearly twice as many Europeans as Africans. Demography is a drama in slow motion. But tick by tock, it transforms the world.

The staggering reversal of population fortunes is largely the result of the huge continental differences in birthrates — 1.6 children per woman in Europe today versus 4.7 children per woman in Africa. By midcentury, however, those rates are expected to increase in Europe and decrease in Africa, as both continents converge toward the projected global rate of roughly 2.25 down from 5 in 1950 and 2.5 in 2015.

Declining global birthrates mostly stem from women’s empowerment. As more girls and women have acquired more education, economic independence, and control over their reproductive decisions, they have had fewer babies. In the 35 years from 2015 to 2050, the world’s population is expected to rise by only 32 percent. During the 20th century, it nearly quadrupled.

As population growth slows, median ages will rise — the result not just of fewer children but also of steady increases in human longevity. By 2050, the share of the global population that is 60 or older will nearly double to 21.5 percent, from today’s 12.3 percent. Aging will be most pronounced in economic powerhouses like Japan, where the median age by midcentury will be 53, South Korea (54), Germany (51), China (50), and the United States (42). The global median age will be 36, up from today’s 30.

Aging
The "gray tsunami" will be a defining feature of the 21st century.

These aging societies will be hard-pressed to maintain their economic vitality as the working-age shares of their populations decline and the fiscal pressures on their health care systems and old-age social insurance programs grow.

Meanwhile, the less-developed countries throughout Africa, the Middle East, Latin America, and parts of Asia are still experiencing a youth bulge (albeit one with less girth than in the past). Countries like India, Nigeria, Egypt, South Africa, and Kenya will see the working-age shares of their population grow between now and midcentury. Their challenge will be to make the investments in human and physical capital needed to take advantage of this demographic dividend.

Since the turn of the millennium, these disparate age structures, along with the incessant march of technology, have already yielded different economic outcomes around the world. According to the World Bank, 1 billion people have climbed out of extreme poverty since 2000, the vast majority of them in poor countries, where inexpensive mobile technology has unlocked new economic opportunity in rural villages and urban slums.

Economics isn’t the only human realm in the throes of demographic change. The world’s religious profile is also undergoing a major shift, driven mostly by differences in fertility rates and age structures around the globe, as well as by faith-switching.

Islam is the fastest-growing major religion in the world. According to projections by the Pew Research Center, by midcentury, the number of Muslims (2.8 billion, or 30 percent of the world’s population) and Christians (2.9 billion, or 31 percent) will for the first time be at near parity. If current trends continue, Islam will surpass Christianity as the world’s largest religion around 2070.

Muslim women have the highest fertility rate of any major religion (an average of 3.1 children per woman). Christian women are not far behind (2.7), which places them above the global average of 2.5 and well above the replacement rate of 2.1.

Religion
For the first time ever, Islam and Christianity will be at near parity in their number of followers by 2050.

In fact for the first time, the Christian populations in France and the United Kingdom are projected to drop below half by midcentury. The growth of Christianity is expected to slow in part due to followers leaving the faith, a phenomenon most prevalent in developed countries like the United States (where the Christian population is projected to decline from more than three-quarters in 2010 to two-thirds in 2050). In comparison, throughout Europe, the Muslim population is expected to rise slightly (to 10.2 percent from today’s 5.9 percent). These projections are dependent on migration patterns that could be affected by geopolitical developments.

That caveat applies to all projections: Demography is the future we already know — except when it isn’t. Harold Macmillan, a 20th-century British prime minister, put it well. When asked what might blow his government off course, he replied, “Events, dear boy, events.”

The number of children a woman has varies dramatically depending on the country in which she lives—from an average of more than five children per woman in Nigeria to fewer than 2.1 per woman in Canada, the United States, Europe, and much of Asia. 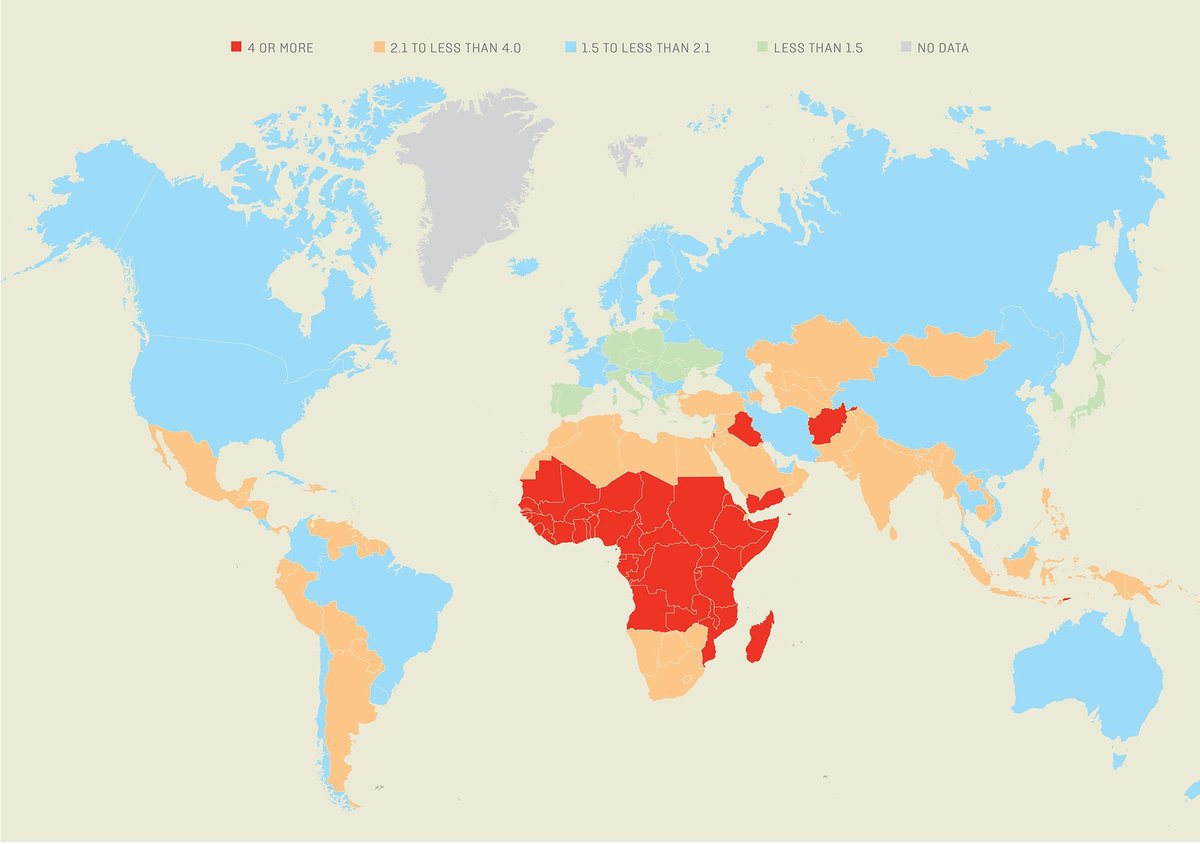 Growth rates will vary sharply by region and continent. Africa will see its population double, while Asia, North America, South America, and the Caribbean will grow by less than 25 percent. And Europe's population is expected to contract by 4 percent. 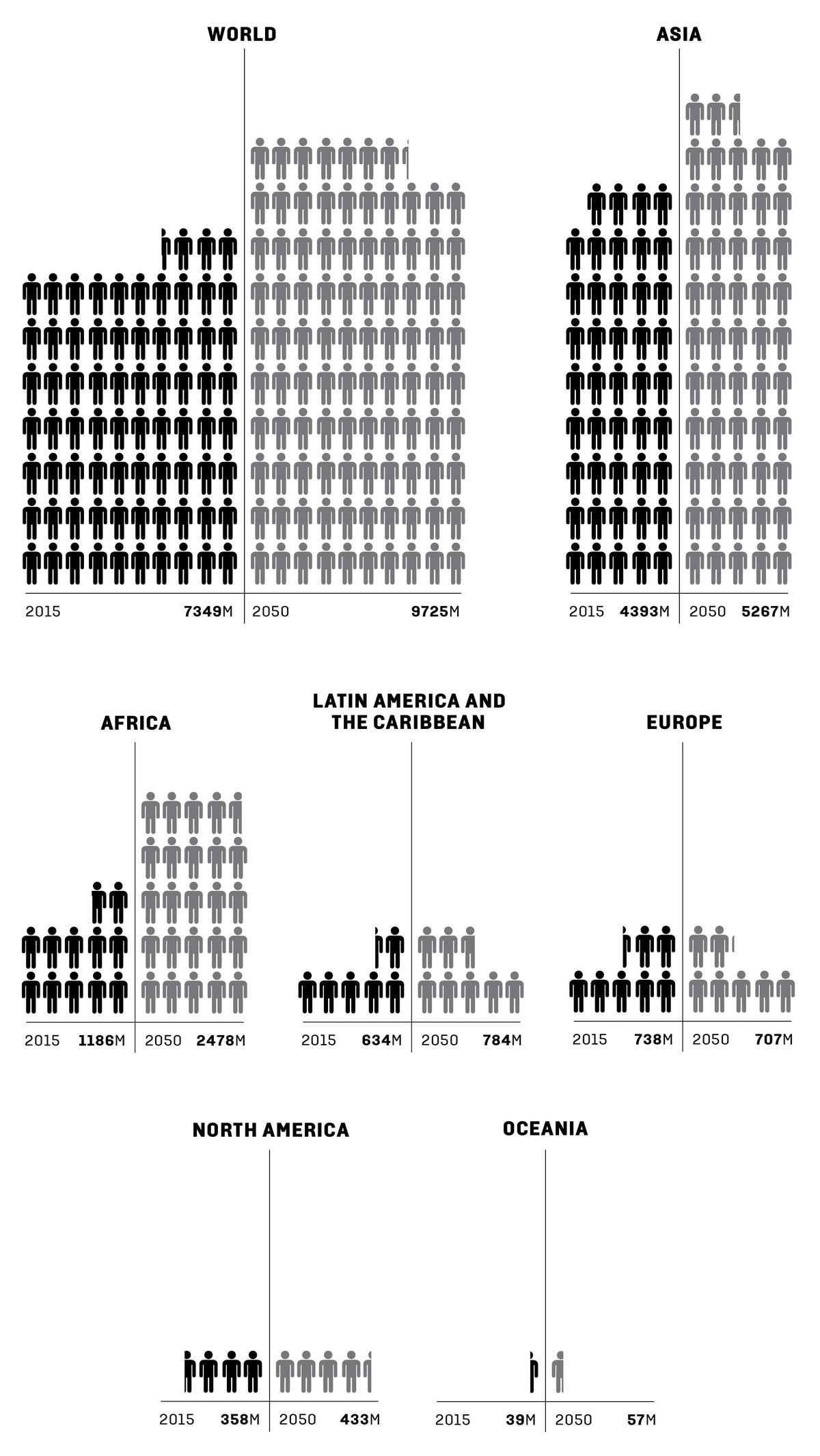 Regional distribution of global population
(2010 and 2050) 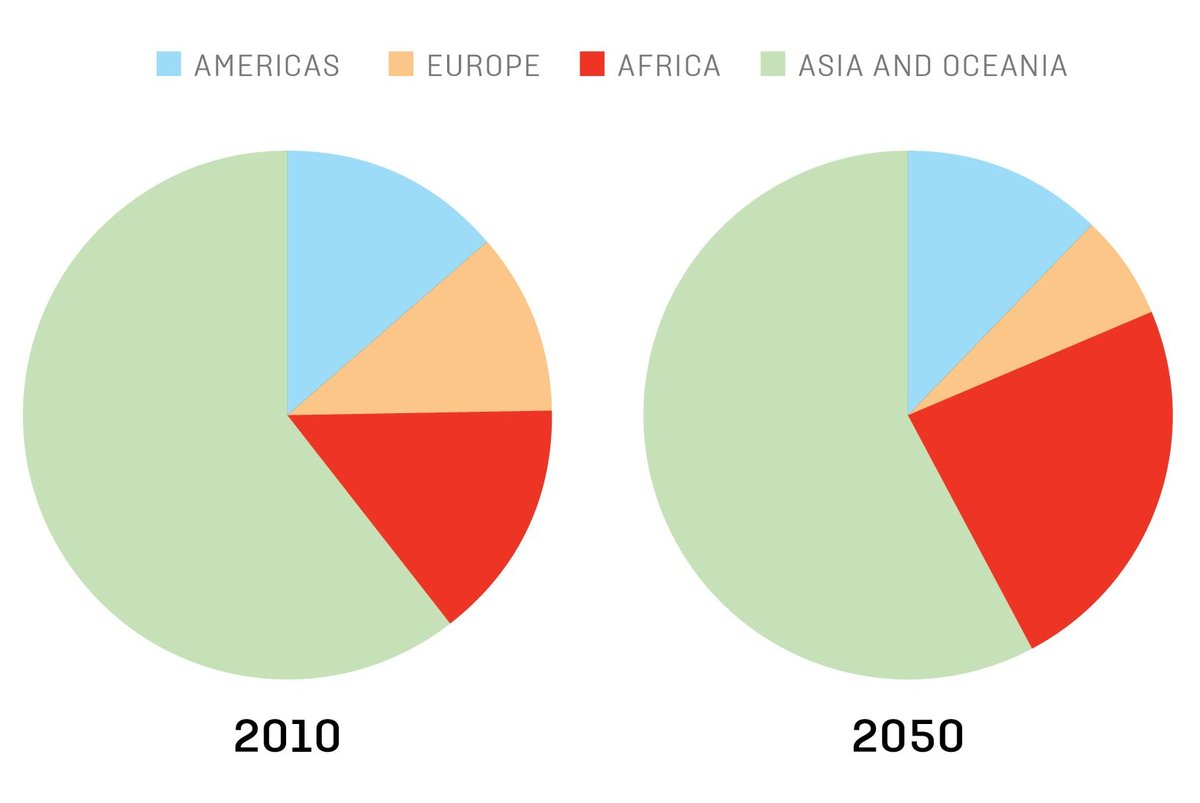 Life expectancy at birth (In years)

The rise of life expectancy across the globe is forecast to continue, with the greatest advances coming in Africa. However, this is contingent on further reductions in the spread of HIV and other infectious diseases. 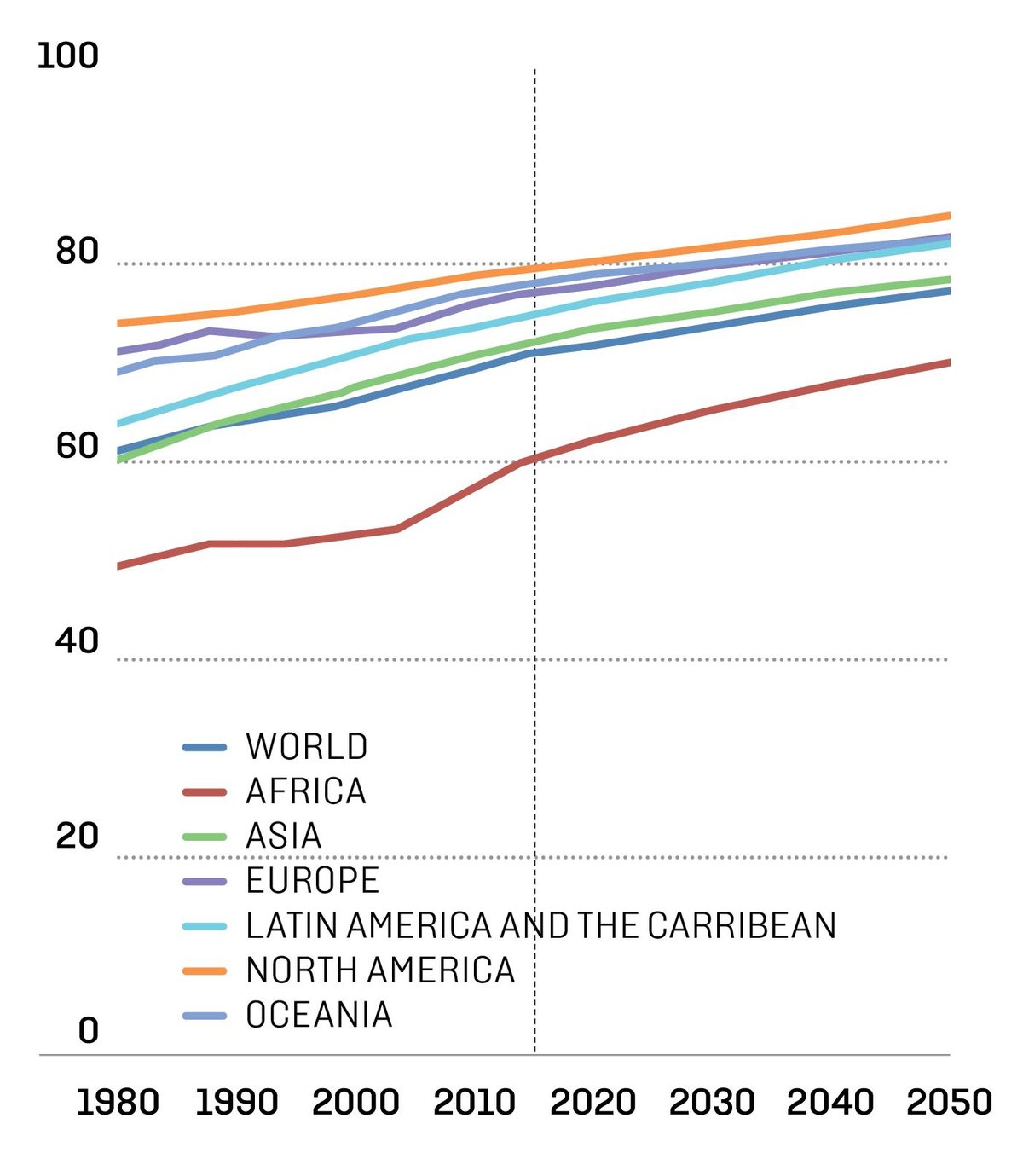 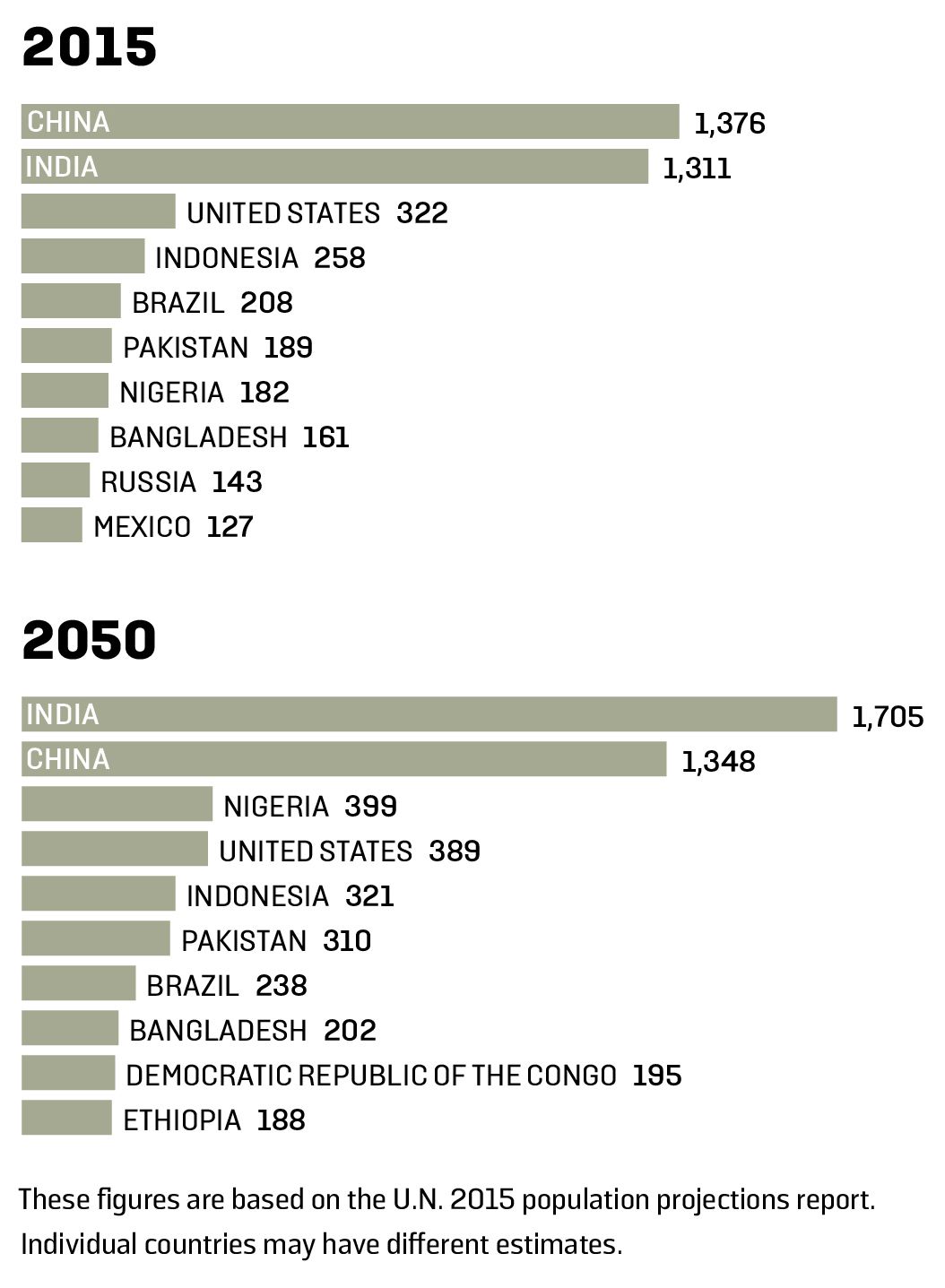 Populations of the world, 65 and older
(In percentages) 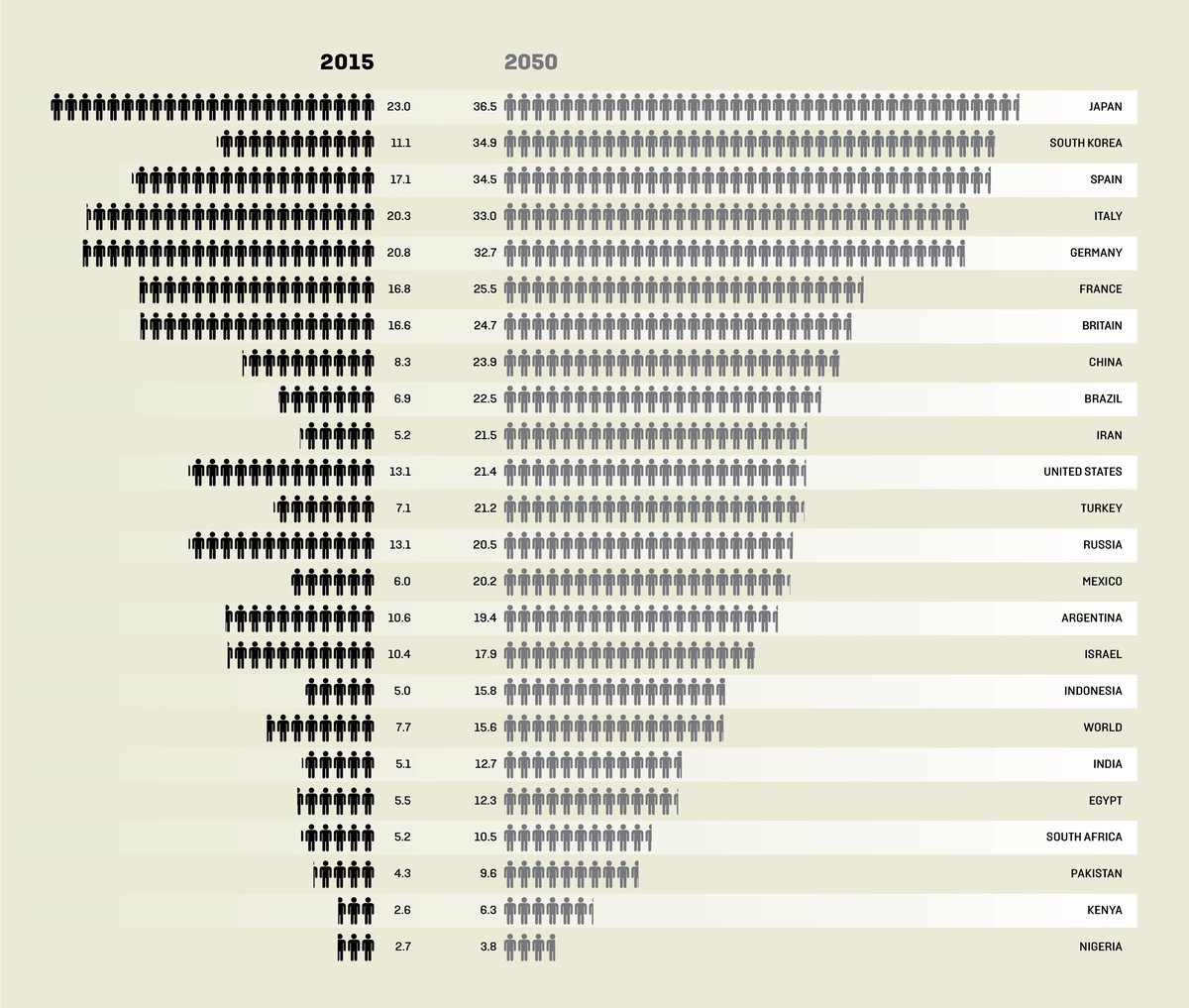 Dependents (For every 100 people of working age)

The world's leading economies will likely see their dependency ratios rise sharply by midcentury, while India and much of Africa will see the working-age shares of their populations grow. 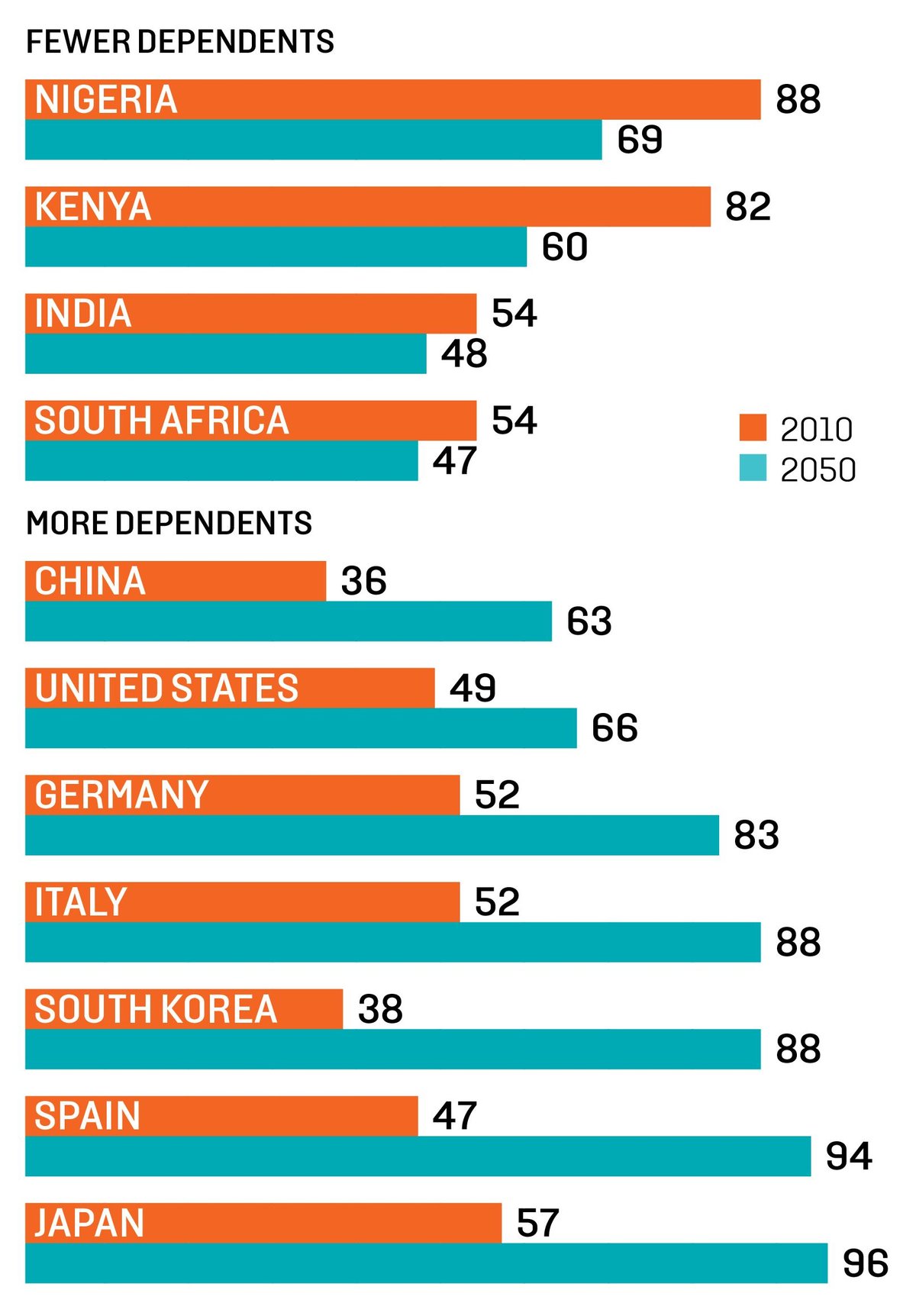 Acceleration of global aging (by percent of population)

By midcentury, Africa will still be young (but less so), while the rest of the world will age substantially. 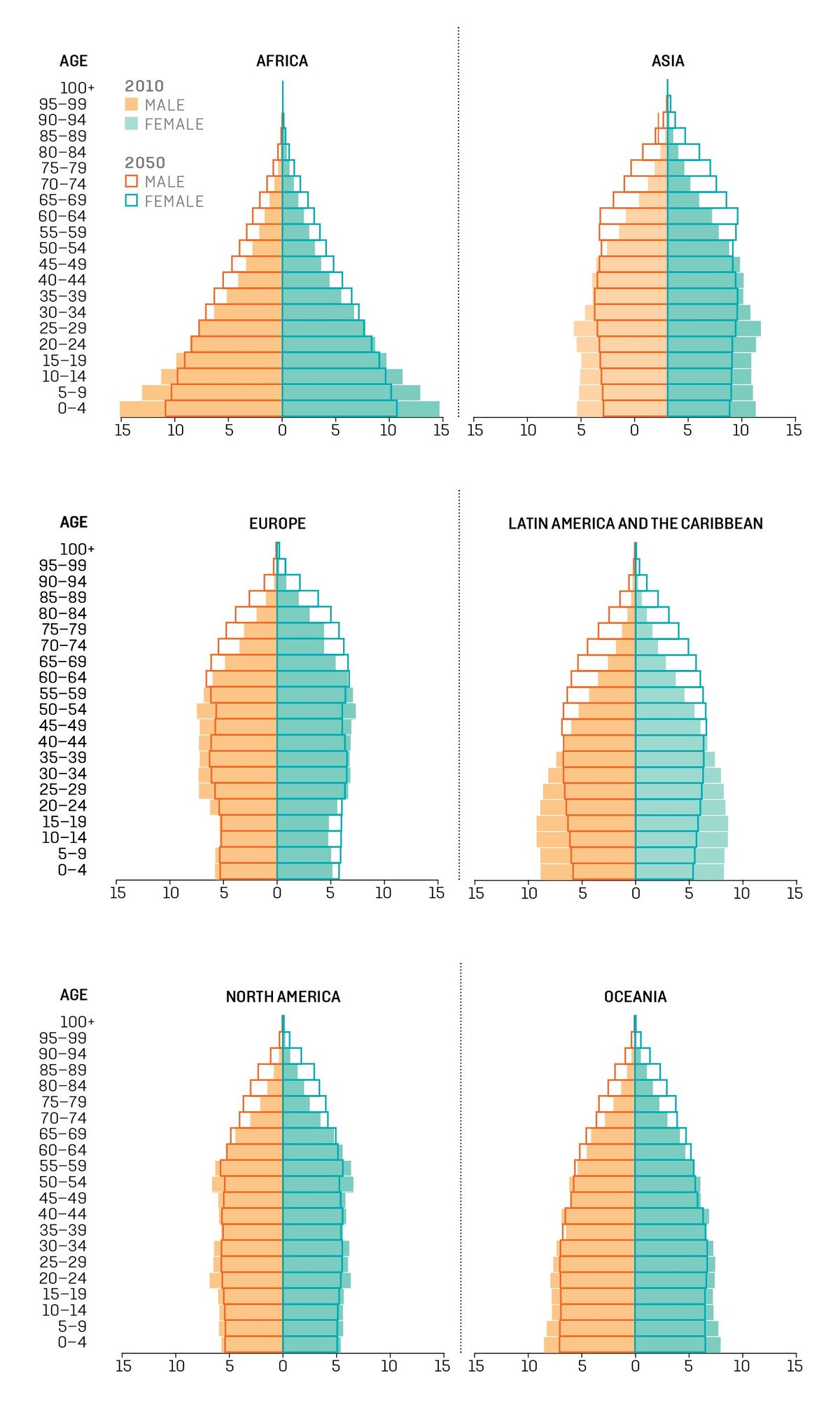 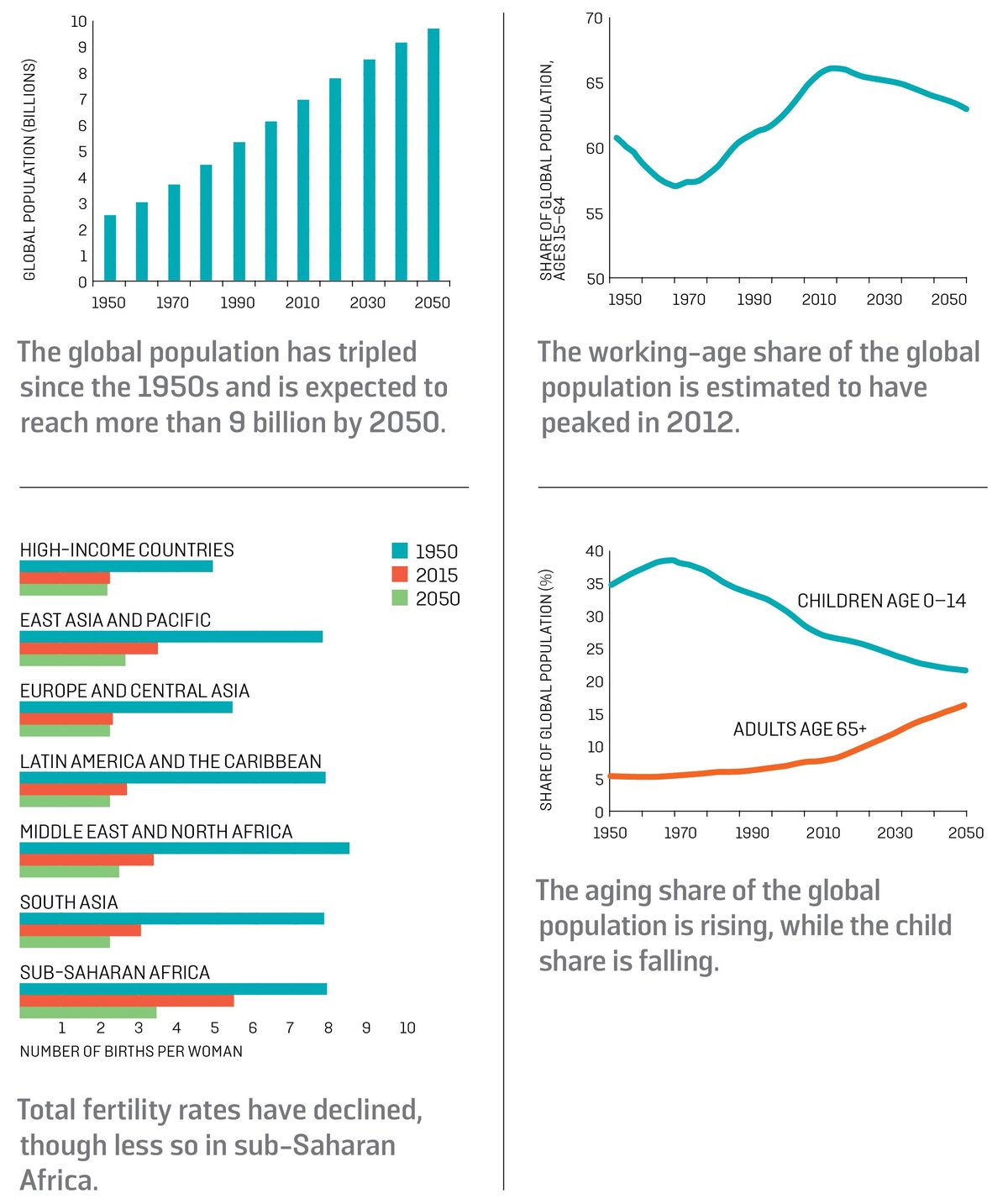 Impact of Migration
(Percentage of projected 2050 population, by religion) 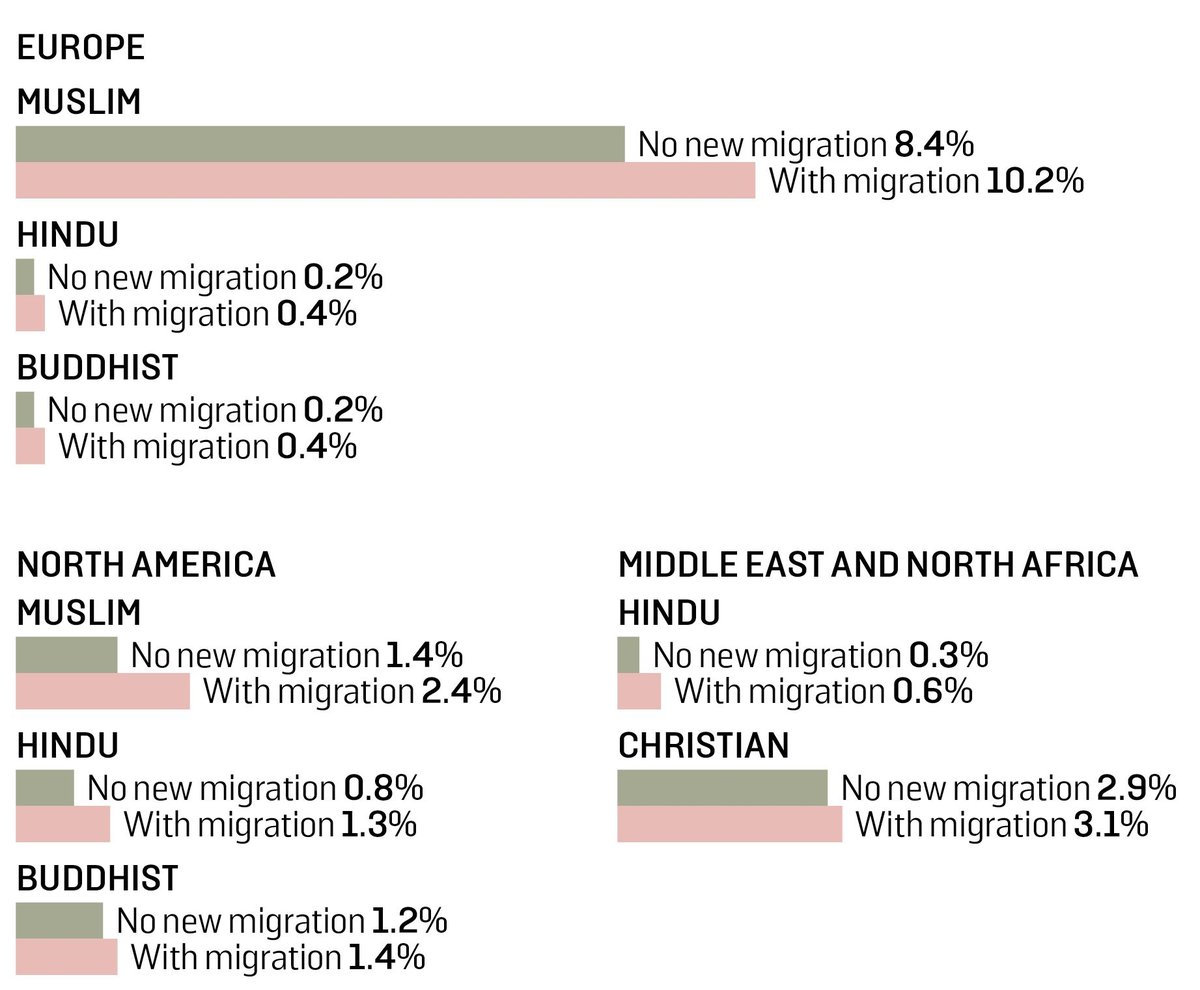 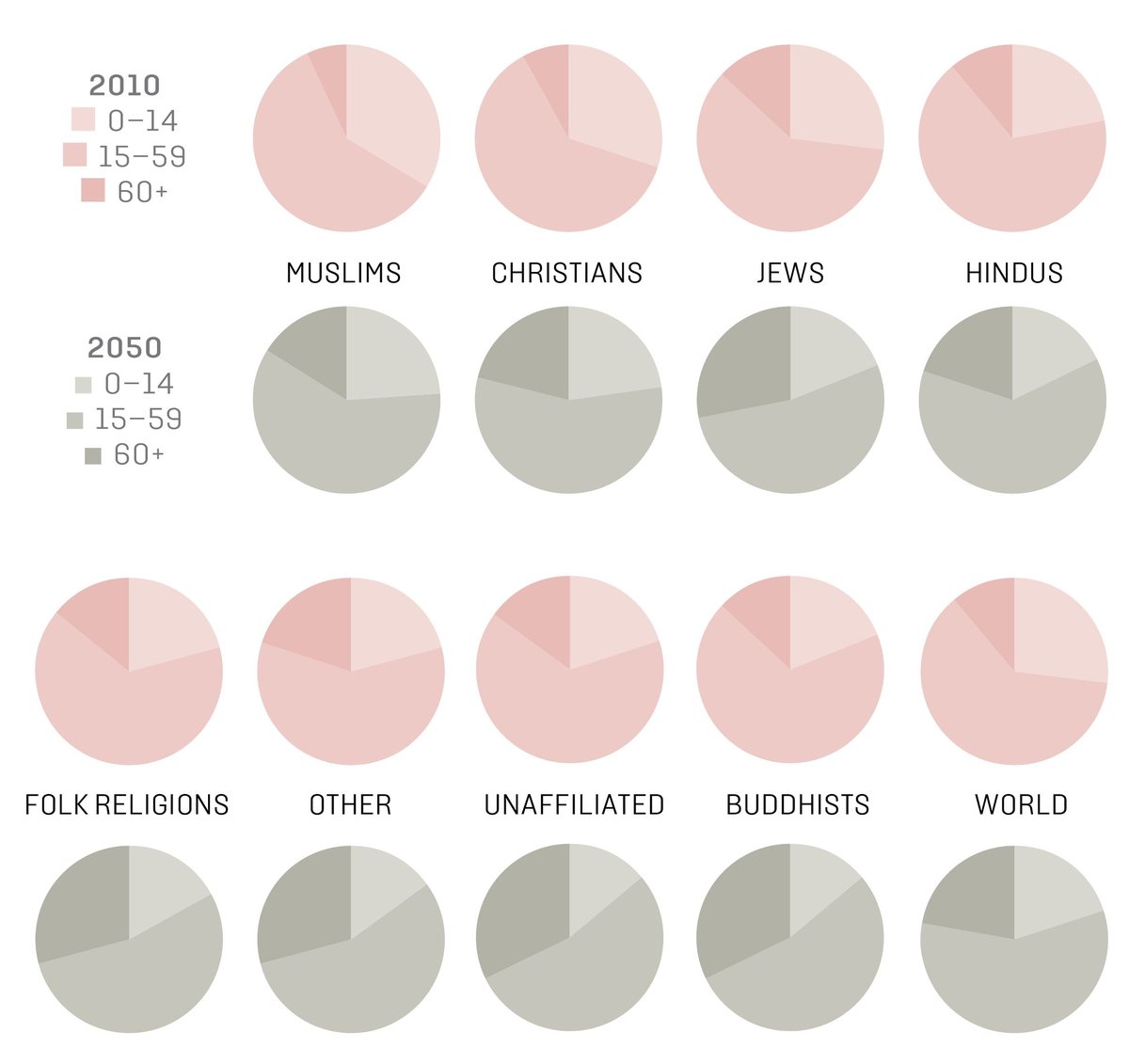 During the next four decades, Islam will grow faster than any other major world religion. 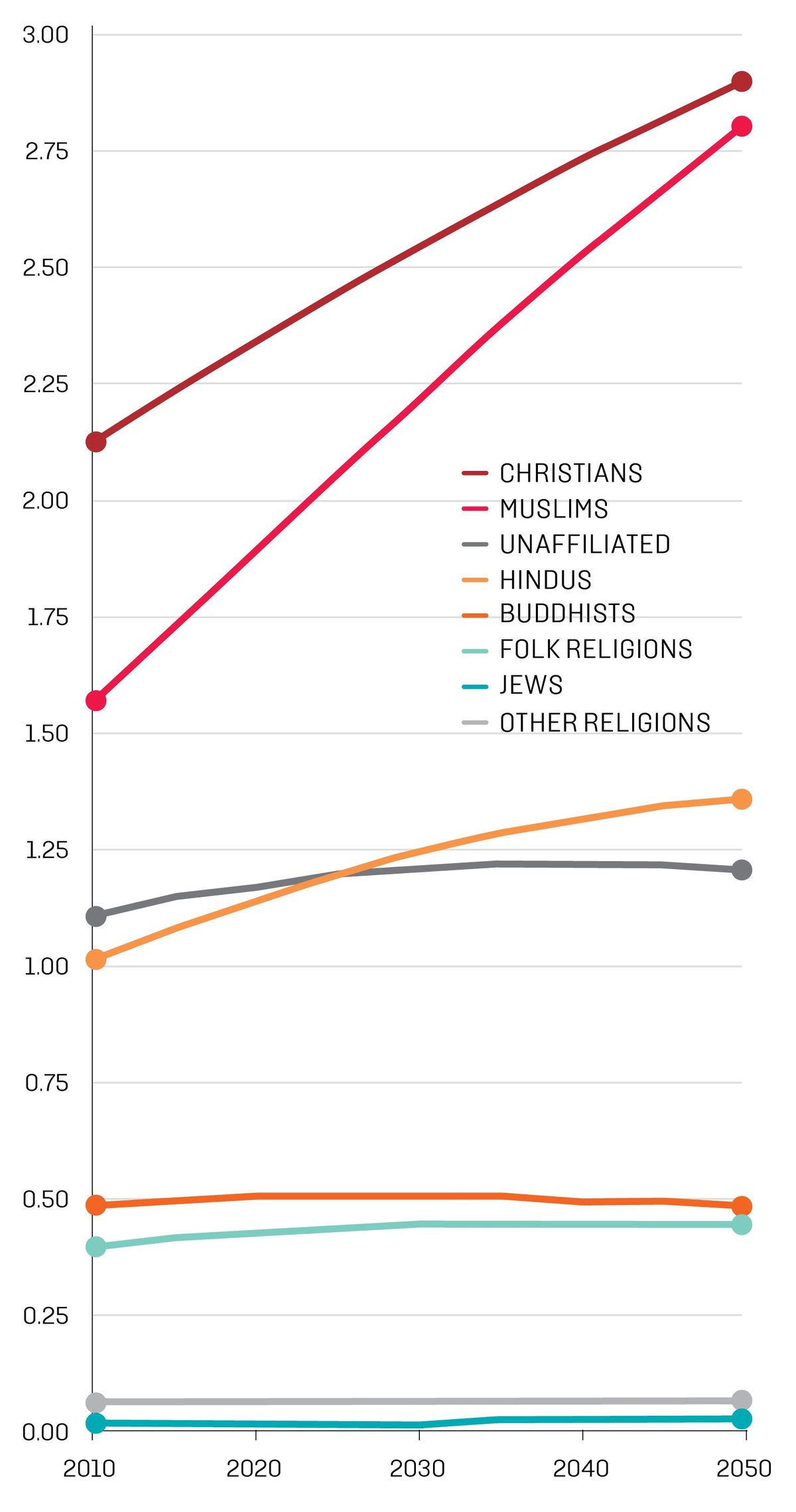 Muslims have the highest fertility rate of any major religion in the world, but it is expected to decline to just above the global replacement rate (2.1 per woman) by midcentury. Christians will follow a similar trend, while Hindu rates are expected to fall below the world average. 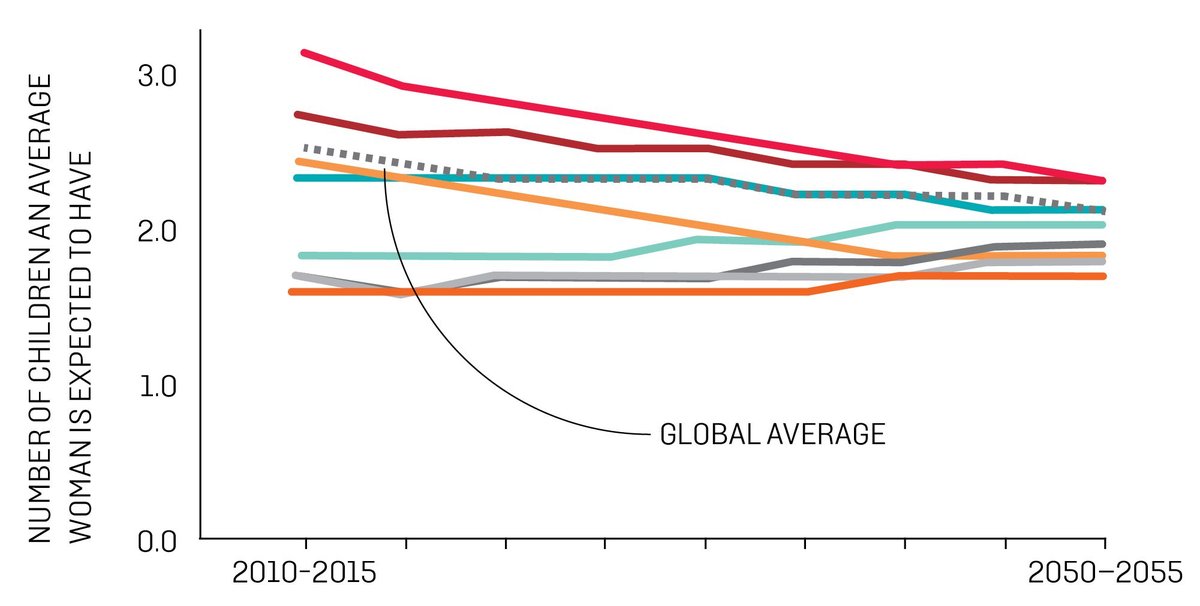 The Muslim population is comparatively youthful, with high (but declining) fertility rates. By contrast, Jews, Buddhists, folk religions, and the unaffiliated will lag the rest of the world in population growth rates.

. He is now a senior fellow at Encore.org.